I am amazed at the useful electronic test equipment the amateur scientist can purchase for so little money these days.  This is just a quick note about the serial command structure used to set attenuation level  on the ATT-6000 step attenuator module.  I purchased my unit new on eBay for less than $30.  This module is probably based on the PE43702 attenuator chip (see below).  The chip has pretty impressive specs, usable up to 6 GHz.  The module I purchased has milled aluminum case and OLED display. It is shown in the above photo hanging in front of its serial port trace.

The program to the left in Fig.1 is the free commercial one that can be downloaded.  I had to ask the vendor to get the download link.  The program does just one thing.  You enter a number and it sends a message to the attenuator that results in the amount of attenuation requested up to the limit of 31.75 dB. Your minimum change can be 0.25 dB.   This program is almost useless as the same thing can be accomplished with a few button presses on the attenuator module itself.

A much more useful feature would be the ability run the attenuator in steps to calibrate a receiver.  The attenuator could be part of a noise figure measurement system,  Programmatic control is desirable. Anyway, I did what any of you might do and ran a serial port monitor to see how the "Digital Attenuator Console" commanded the attenuator to change to X dB attenuation. And it is very simple.

The device operates using 115k baud.  I don't know what microprocessor it uses.  I didn't want to open mine for fear of somehow messing up the connections to the SMA connectors from the board.  If some has pictures or info on the insides please share.  However, there has to be a micro-controller of some sort, even if it is just part of the USB to serial converter.  To set the attenuator to (-) 31.25 dB
you would send it:


All values are composed of 5 digits preceded by the characters "wv" and followed by a Line Feed character (10d or OAh) Sometimes the device sends back a couple of characters but I don't see any meaning for them.

If anyone hacks this device and we can reprogram it, I can't wait to change the display.  Currently it shows the attenuation reading in small print on one line and on the next line says "Fre=6,000,000KHz", a useless bit of information, referring to the upper bound of the spec. I would much rather make the top line larger and eliminate the second line. 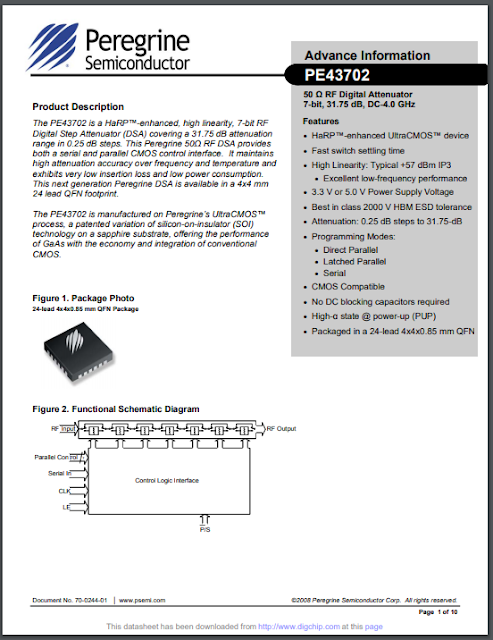 ATT-6000 electronic rf step attenuator and its serial computer interface. I am amazed at the useful electronic test equipment the amate... 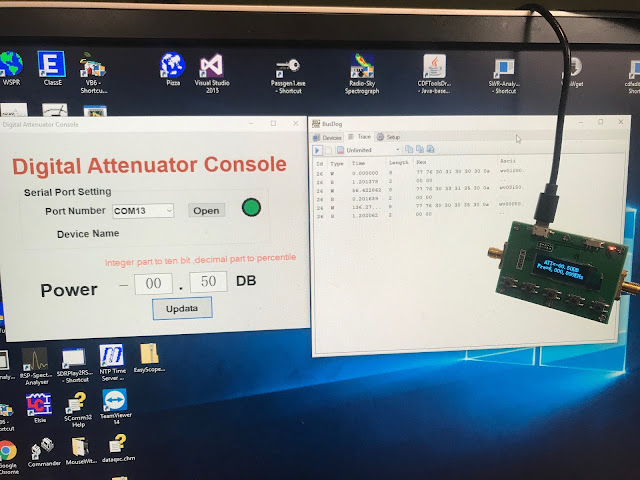