Amateur radio astronomer Jim Brown in Pennsylvania recently successfully used a RTL Dongle, Ham-It-Up converter, and a preamp/filter built by Richard Flagg, AH6NM.  Jim said I could use one of the images and here it is below.

I don't want to say too much about Jim's observation as I think he might write it up, but I can say that he was using my software, Radio-Sky Spectrograph (RSS), in conjunction with RTL Bridge.  This proof of concept observation should be encouraging to those who would like to make spectral observations of Jupiter and the Sun using an inexpensive dongle receiver.  Though not as informative as the 10 MHz wide spectrograms we have been seeing in the Radio Jove project, the spectral information does make it easy to identify Jupiter.

Recently I was able to take some time to experiment with Oliver Jowett's  low frequency patch for the Osmocom drivers that allows extending the range of the RTL+R820T below the usual 24 MHz limit without a upconverter or hardware modification.  Using a 2.04 MSPS rate, I was only able to see signals down to about 15 MHz, but many people have reported going much lower.  So while at the time I write this no one has recorded Jupiter with a "naked" dongle, I hope someone will give it a shot soon.  To help push that along I have repackaged RTL Bridge and RSS with the patched drivers.  I have also made a couple of changes to RTL Bridge and RSS.  In RTL Bridge there is now factor that can be used to scale the data appropriately for output.

The new Data Scale Factor is multiplied with the FFT power output before it is passes to RSS.  It was found that this was necessary to get readable deflections in RSS for weak signals.  The other scale factor, now safely tucked into a frame titled Local Display, That factor only affects the display in RTL Bridge and does not alter the data leaving for RSS.

If you do not have RSS installed, then you can get it here:

If you have RSS installed and just want the latest updates go to:

If you are new to this please read the other blog posts I have done on RTL Bridge. You should read the help page  if you have not yet used RTL Bridge.  Please let me know how it works out. 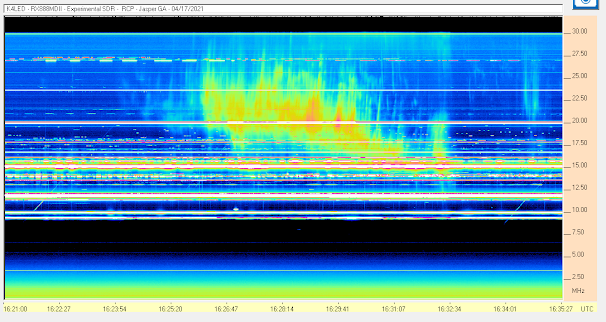