Spectra displays sure have become popular.  When did you see spectra in the 1960s if it wasn't due to a rainbow﻿ or a mushroom?  Now our stereos and radios are very likely to have some sort of spectral display. Adding that extra dimension of frequency reveals patterns that cannot be discerned through a speaker or on a strip chart.   In the not too distant past, motors turned capacitors that tuned receivers that output spectra in terms of modulated light.  This in turn exposed a slit across  a slowly passing strip of photographic film.  Now we can simply? sample the entire HF spectrum with an insanely fast analog to digital converter, run it through a computer and, bang your done.  These new fangled technologies!


It was over 11 years ago that the Radio Jove Project received funding to develop a spectrograph that could be used to see Jupiter and Sun radio emissions in the HF range from 18 to 30 MHz  The device we built was designed by Richard Flagg and me over a period of more than a year.  We had earlier had produced spectra by sweeping a Icom R8500 receiver using serial connection to PC.  This actually produced some interesting spectra, but it was too slow to see the short duration S-Burst type of Jupiter radio emission. What's an S-Burst ?  According to the UFRO:

"The S bursts (S for Short) are very short in duration, have instantaneous bandwidth of a few kHz to a few tens of kHz, and drift downward in frequency at a rate of typically -20 MHz/sec. They arrive at rates from a few to several hundred bursts per second. In a 5 kHz bandwidth receiver they last for only a few milliseconds"

So we only had half of a second before the S-burst traversed the entire 10 MHz we were observing (18 to 28 MHz usually). By sweeping at 10 scans per second in the high to low frequency direction, we get at least 5 chances to see the S burst as it makes it's decent.


Dick designed all of the analog electronics and I did the digital stuff and supporting software. Dick also built the spectrograph  (shown below) and he really did a beautiful job, that any geek would envy. Had I built it, would have looked more like the prototype shown above.  The result was a sweeping receiver that measured the radio energy in each of 200 channels about 10 times each second.  The more modern approach would of course be to use a software defined radio that samples the entire HF band simultaneously.  That would have been quite a challenge that long ago, so we took the more well trod path of sweeping a single channel receiver in the style of the older spectrum analyzers. We called the spectrograph the FS200, (Flagg-Sky 200 channels - which we named is a very self-congratulatory moment).  It was installed in the Windward Community College radio observatory on Oahu, Hawaii, and is still running non-stop today.


The results were beyond our expectations.  We could see Jupiter spectral emissions in detail that only the Nancay observatory in France could outdo. OK, I have no proof or even evidence of that, but it would be nice if true.  A second instrument was built and coupled to the then viable University of Florida TP array.  Unfortunately, thieves have since decided the unmanned observatory was more useful as a source of scrap metal than as a scientific facility.  Luckily the FS200B was saved and has been relocated. It is currently operated by Dave Typinski.  Dave, Wes Greenman, and Jim Brown have been putting instruments to use and producing spectacular results.  More spectrographs will be coming on line over time and of course the WCCRO machine is almost always available for viewing though it sometimes has interference issues.

A Jupiter noise storm showing intricate structure.
Several years ago Kazu Imai of Agawa Observatory in Kochi Japan commissioned me to modify the Radio-Sky Spectrograph software (RSS) to work with rfspace's SDR-14 software defined receiver.  Rfspace sharply foresaw that others might want to write programs for the SDR-14 and provided an easy to use ActiveX interface to the spectral data within. That made supporting their device possible. The Japan based SDR-14 is not available on line, but I mention it as a possible commercial device for people who would like to have their own spectrograph that works with RSS.  The SDR-14 no longer is produced, but occasionally you will see one offered for sale in the SDR-14 users group. 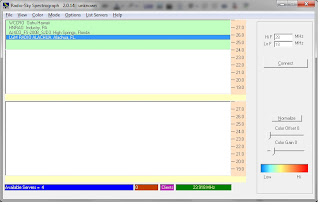 RSS in Client Mode. Four servers were available at the time this was copied.

But anyone can download and use RSS and link to one of several spectrographs that are available over the internet.  The software is completely free. RSS has Stand Alone / Server / and Client modes just like Radio-SkyPipe.   Of course, you need an SDR-14 or one of Richard Flagg's custom receivers to use the first two modes.  I will apologize beforehand that there is not much in the way of help available for users of the program.  Let me know if you get stuck on some aspect of the program.

More recently we developed a "stereo" version for looking at right and left hand signals simultaneously.  This project was commissioned by Dave Typinski and we really hope to see some great results from this device in the upcoming Jupiter season.
at August 29, 2013